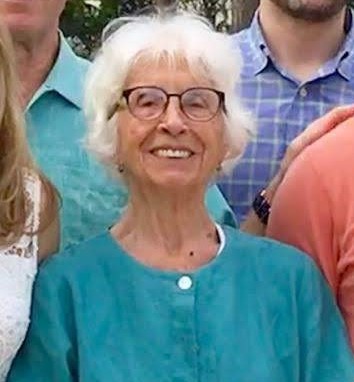 Lucille Nobili Weber, passed away on May 24, 2019 in Hobe Sound Florida, where she spent her winters in recent years. She died from cancer, which had been recently diagnosed. Mrs. Weber was born in Cleveland Ohio in 1927 to Teodoro and Francesca (nee Fontana) Nobili, who had immigrated to Cleveland from Italy. She attended Bowling Green State University and it was at BGSU where she met the love of her life, Robert F Weber, a WWII veteran from a suburb of Philadelphia PA who was attending BGSU on the GI Bill. (How this war veteran from the East Coast got to BGSU is a story of providential intervention in itself.) They were married at St Michael’s Church in Independence OH.

Mrs. Weber earned her undergraduate teaching degree at BGSU, and later earned a Master’s degree in Gifted Education. She taught at many Cleveland-area schools over the years, beginning at Jane Addams High School in Cleveland. After starting her family, she later taught in the Chardon system as a Middle School English teacher, and at Lumen Cordium High School in Bedford. Later in her career she served as an instructor in Italian Language at Lakeland Community College. After her full time teaching career had ended, she worked for the Geauga County Courts, doing investigations into domestic relations matters for Judge Robert Ford.

Mrs. Weber and her husband were avid bridge partners and , while she tried to enjoy golfing with her husband, they both decided it was better they stick to bridge. They greatly enjoyed traveling together, making numerous camping trips with family throughout the United States, and also traveling to Europe, especially to Italy where she visited relatives in the Tuscan hills. To celebrate her ninetieth birthday, she took a Mediterranean cruise with her children and their spouses. She was also an exceptional cook, putting her own creative touches on her mother’s traditional specialties. Mrs. Weber’s red sauce for pasta was a family favorite, something often imitated but never equaled.

She very much enjoyed all these activities (except for golf), along with many others such as gardening and reading, but her real love was time with her family, which included her two children (Robert and Cynthia), and eventually grew to total six grandchildren and seven great-grandchildren. She was enjoying her time with the great grandchildren as their beloved Nonna up to a few weeks before she became ill in the spring of this year. Mrs. Weber also considered her niece Sue Zulandt (nee Nemec) to be part of her family and served as a much-loved Aunt Lu for Sue and her nine children and 14 grandchildren. For years Mrs. Weber hosted a multi-day “camp” in her backyard for children from the Weber, Gage and Zulandt families, organizing endless games and activities, cooking and serving meals, and being there at night to make sure everyone got to sleep without incident. It was joked that she herself slept for weeks after each year’s camp.

Mrs. Weber was a long-time parishioner at St Mary’s Church in Chardon Ohio, and took care to teach the faith throughout her extended family. After the death of her husband in 2012, she continued with her active family life and also volunteered at the election polls in Geauga County.

Offer Condolence for the family of Lucille Weber

Priscilla “Sid” Strong Carlson made her transition on October 14, 2021. She was born to Harold and Helen (nee: Quiggle)...